skip to main content
We may earn money when you click on our links. Learn More.
Get Home Security
Home » Home Security » SimpliSafe Doorbell Review: A Sturdy Doorbell Cam that Covers the Basics

The SimpliSafe Video Doorbell Pro is a little light when it comes to features. But with an expansive field of view and accurate motion detection, it makes a good fit for SimpliSafe customers. 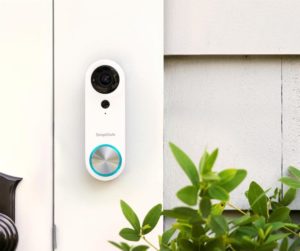 Overview
SimpliSafe offers great no-contract security systems and monitoring at an affordable price. The company also offers a couple of cameras, including the SimpliSafe Doorbell, that can be used with or without a subscription.

The SimpliSafe Video Doorbell Pro has a few of the features of other smart doorbells on the market, from two-way audio to infrared night vision. But when it comes to more advanced features, the SimpliSafe Doorbell falls short.

Since it’s only compatible with other SimpliSafe equipment—from your entry sensors to your keypad—you won’t be able to use voice commands or integrate it with IFTTT. And SimpliSafe doesn’t offer a wireless doorbell option, so you’ll only be able to use it if you have an existing doorbell set up and a mechanical chime.

Read on to learn more about the SimpliSafe Video Doorbell Pro, how it shapes up to other smart doorbells, and whether it’s the right fit for you.

The SimpliSafe Video Doorbell Pro has a wide 162° field of view, 1080p HD resolution, and infrared night vision. It also has two-way audio, but in our testing there was usually a delay with the walkie-talkie-style audio. For some users, the delay may make it more difficult to carry on a conversation with the person on the other side of your door.

The SimpliSafe Video Doorbell Pro is one of the only doorbell cameras with pan-and-digital-zoom functionality. Try either feature on your video clips to get a clearer view of things like license plates and faces.

Depending on how close your SimpliSafe doorbell is to your router, you could also experience choppy video playback and delays in live view. For now, SimpliSafe doesn’t offer a range extender, but you can purchase a third-party Wi-Fi extender instead.

The SimpliSafe doorbell’s motion detection capabilities, on the other hand, are pretty impressive. It has a dual sensor that identifies human heat signatures, so you won’t get alerts for cars or stray cats.

You won’t get any customizable motion zones, like with one of Ring’s doorbells, but you don’t really need it: in our testing, there were very few false alarms.

The SimpliSafe doorbell camera is also pretty versatile, and it will work with your home whether you have a SimpliSafe security system or not. If you are using it as part of your system, the Video Doorbell Pro will connect to the other sensors in your home.

So when your entry sensors detect activity, the SimpliSafe doorbell—and whatever other SimpliSafe security cameras you have—will start recording. It’s a great way to keep tabs on multiple parts on your home, so you can get the full picture.

SimpliSafe’s mobile app is simple and easy to navigate. Once the camera is set up, you’ll get a notification on your mobile device whenever the doorbell detects movement or when someone rings the doorbell button.

You can also use the mobile app to adjust any of the SimpliSafe doorbell’s features: you can turn night vision, two-way audio, and motion and doorbell ring notifications on and off—and you can adjust the motion detection sensitivity between off, low, medium, and high.

However, the Video Doorbell Pro can be used as a standalone product without a SimpliSafe system or in conjunction with the SimpliSafe Smart Lock.

As long as you’re comfortable working with electrical wiring, installing the Video Doorbell Pro is easy to do with just a screwdriver.

Insert the wires into the screws of the bracket and tighten the screws. From there, you’ll only need two screws to secure the bracket to your wall.

The doorbell itself slides easily into the mounting bracket—just be sure to screw in the setting screw in the bottom of the camera so the doorbell can’t be removed or tampered with. Depending on your experience, and whether you need to drill any new holes, the process should take 15 to 45 minutes.

At $169, the Video Doorbell Pro is less expensive than other doorbells on the market: both the Ring Video Doorbell 2 and the August Doorbell Cam Pro are $199 (but they make up for the price difference with a few more features).

In addition to the cost of the doorbell, you’ll have to pay a monthly fee to access recorded video. $5 a month will cover a single doorbell, and you’ll get 30 days of storage for event recordings.

If you have a doorbell and a SimpliCam, we recommend SimpliSafe’s multi-camera recording plan. For $10 a month, you’ll get 30 days of storage for event recordings for up to 10 cameras. It’s a bit on the pricey side, but it’s worth being able to have cloud storage for each of your cameras.

SimpliSafe vs. Ring vs. August

At $199, the Ring Video Doorbell 2 is a great value. You can choose whether to hardwire it into your existing doorbell wires or use it wirelessly, and you can even adjust motion zones, so you can choose what areas in your front yard need the most attention.

>>Read our review of the Ring Video Doorbell.

The August Doorbell Pro Cam has a lower video resolution than SimpliSafe’s doorbell, but it has an impressive number of integrations.

It’s compatible with Apple HomeKit, Amazon Alexa, and Google Home, making it a great fit for people with smart homes.

>>Read our review of the August Doorbell Cam Pro.

With some solid features and a sleek design, the Video Doorbell Pro is a great pick if you already have a SimpliSafe security system. You’ll be able to integrate it with your other SimpliSafe devices, plus you’ll get an expansive field of view and crisp 1080p HD resolution.

Get the SimpliSafe Video Doorbell Pro

If you’re looking for a standalone smart doorbell, there are plenty of more feature-heavy options that won’t necessarily break the bank. With Ring video doorbells, expect adjustable or customizable motion zones. With August’s doorbells, you’ll get unparalleled smart home compatibility.

When it comes to feature-rich doorbells, there are plenty to choose from.

>>Read our round-up of the best doorbell cameras.