Ring in the news

Some Ring users recently reported security breaches that allowed access to camera feeds and two-way communication. Ring told us that these are due to consumers not taking proper precautions like using unique credentials, changing passwords regularly, enabling two-factor authentication, and adding authorized users instead of sharing credentials.

We still recommend Ring products, but we recommend securing all internet-connected devices.

Overview
SimpliSafe and Ring are DIY home security systems with equipment and monitoring that won’t break the bank. While you might think that low costs mean lower quality, both of these security systems pack a lot of value into their prices.

Of the two systems, SimpliSafe is the most flexible by offering multiple monitoring plans and more starter kits than Ring. SimpliSafe, founded in 2006, also has more experience with home monitoring.

Ring’s practically a newbie by comparison; it started selling its first home security systems in 2018. While Ring doesn’t have as many monitoring options as SimpliSafe, its more affordable monitoring plan is hard to beat.

Pros and cons of SimpliSafe

Pros and cons of Ring Alarm

Ring’s monthly fee is cheaper than both of SimpliSafe’s monitoring plans, and you get mobile monitoring with it, making it superior to SimpliSafe’s base plan. You even have the option to pay a yearly fee to save a little extra money:

Even so, SimpliSafe monthly monitoring costs are still lower than most national security providers, including ADT and Vivint.

The biggest reason SimpliSafe and Ring are so affordable is that they don’t have compulsory contracts and let you install your equipment. Regardless of whether you choose SimpliSafe or Ring, it’s nice to know the ongoing costs are a good value compared to traditional security systems.

While Ring technically has a cheaper plan for $3 a month, this plan covers video storage for only one Ring video doorbell or security camera. You need to pay for the plan that costs $10 a month to get professional monitoring on a whole Ring Alarm system.

Both SimpliSafe and Ring offer several equipment starter kits. Either company likely has a starter kit that will work for your home—your choice will be determined mostly by the number of doors and window sensors you need.

The lowest price starter kits from both SimpliSafe and Ring Alarm have essentially the same equipment. The main exception is that Ring’s security system kit comes with a range extender that ensures your sensors can all communicate. That’s especially helpful if you have a large home with more sensors.

SimpliSafe has better starter kits in general. Its most expensive packages add not only more entry and motion sensors, but also new types of equipment such as security cameras and smoke detectors. These extra devices go beyond simple intrusion detection and add another level of safety to your home.

If none of the default starter kits are a perfect fit, both companies let you customize your equipment to suit your needs. 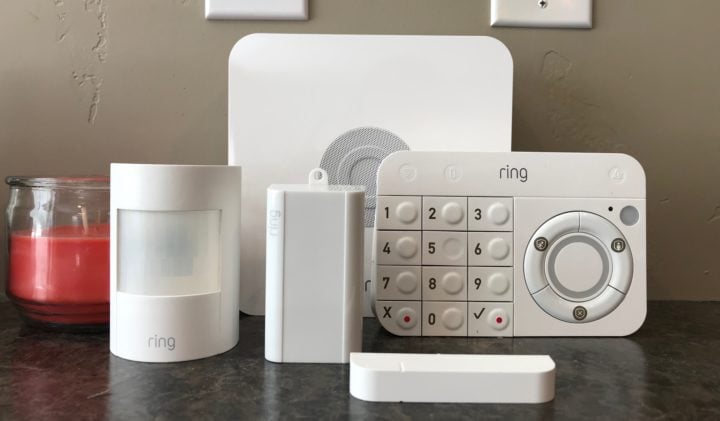 SimpliSafe arguably has the more attractive keypad with a sleek black screen above the controls. This screen also doubles as a button (though it’s not a touchscreen) that lets you adjust settings without a computer or mobile app.

Ring’s keypad has a more traditional appearance, though it doesn’t have a screen to let you change specific settings. For that, you’ll need Ring’s mobile app. 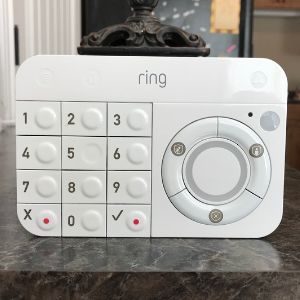 Both keypads are just as good for arming and disarming your security system, but we prefer SimpliSafe’s keypad because it gives you additional controls like adding new sensors or setting up a Wi-Fi connection.

Ring doorbells may not be as advanced as the Nest doorbell, but they easily beat SimpliSafe because you can choose from multiple models to fit your household. You also don’t have to pay extra for video storage since Ring’s professional security monitoring plan includes 60 days of video storage.

Check out our Ring doorbell review to for an in-depth comparison of Ring’s doorbells.

Our favorite Ring doorbell model is the Ring Video Doorbell 2 because you can use it with or without doorbell wires thanks to a rechargeable battery.

As with its video doorbells, Ring also has a better selection of security cameras, with several indoor and outdoor cameras to choose from. Most of Ring’s outdoor security cameras have an integrated floodlight to help scare off trespassers or simply illuminate your path a night.

We mentioned Ring’s security cameras with built-in floodlights, but Ring also sells outdoor smart lights without cameras. You can get different models to place along sidewalks, on steps, or to mount on a wall. SimpliSafe doesn’t have any lighting products at this time.

>>Learn more about these and other Ring compatible devices.

Compared to other security companies like ADT, neither SimpliSafe nor Ring have much in the way of integration with popular smart home devices.

While SimpliSafe works with Amazon Alexa, Google Assistant, Apple Watch, August, and the Nest Learning Thermostat, you need to pay for SimpliSafe’s more expensive monitoring plan to get that versatility. It’s not a surprise since many security systems charge extra for smart home and mobile app functionality.

Compared to other security companies like ADT, neither SimpliSafe nor Ring have much in the way of integrations with popular smart home devices.

Ring, on the other hand, supports only Amazon Alexa and Z-Wave smart home products. It doesn’t require any additional fees to work in your smart home though.

Without a clear winner in smart home compatibility, we can’t make a specific recommendation on which home security system is better. But you should choose the system that best fits the devices you already have.

If you don’t want to pay extra to use a mobile app with your security system, Ring is the only choice to make. The app lets you control the system, add new equipment, and view live video from your security cameras.

SimpliSafe works much the same way, but you pay $24.99 a month to use the app at all. SimpliSafe has better user ratings from the Apple App Store and Google Play, but Ring’s app still works well enough for most people.

You won’t have much trouble installing these security systems since both come with helpful guides that walk you through the process. The motion sensors and entry sensors are easy to install because you stick them where you want using an adhesive strip.

While many of the larger devices, such as keypads, come with adhesive strips, you can use screws to secure them to the wall. If you add a doorbell from either company, you can expect to put more effort into installing video doorbells.

If things don’t turn out how you expected after you buy a home security system, it’s nice to have the option to get your money back. SimpliSafe’s 60-day return policy is better than Ring’s, which lasts only 30 days. Ring also charges $5 for return shipping while SimpliSafe covers all shipping costs.

Getting your money back

You can get a full refund on equipment purchases before the return policy runs out. But you won’t get back any money you spent on monitoring fees.

Note that both return policies apply only if you buy directly from the companies. If you get equipment from other retailers like Amazon, Best Buy, Costco, etc., you’ll need to defer to their return policies instead.

As much as you want all of your equipment to function flawlessly, sometimes it doesn’t, and you need help to fix it. You can contact SimpliSafe seven days a week from 9 a.m. to midnight Eastern. These hours are flexible enough that you won’t need to change your schedule around getting help. While Ring has 24/7 customer service, we found it varies in quality from customer to customer.

In case you can’t fix a device with help from customer support, each system’s warranty lets you get a replacement free of charge. SimpliSafe has a three-year warranty while Ring covers its devices for only one year.

SimpliSafe and Ring are both excellent home security systems for an affordable price. Most importantly, neither system has a contract, so you pay for monitoring only when you want it.

If you’re looking for a big selection of starter kits, we recommend SimpliSafe.
SimpliSafe has more than enough starter kits to fit your needs, no matter how small or large your home is. If those don’t work, you can also customize your system to your exacting standards. SimpliSafe also has an excellent 60-day return policy in case you decide the system isn’t right for you.

To learn more, check out our in-depth SimpliSafe review.

If you want more affordable monitoring and excellent cameras, we recommend Ring Alarm.
Ring Alarm’s monthly monitoring prices are much cheaper than SimpliSafe’s, and you can save even more with an annual monitoring plan. It also has a good selection of standard security devices but stands out in terms of its many video doorbells and cameras.

For more information about Ring Alarm, read our Ring reviews.

Written by
John Carlsen
John is a technology journalist with over six years of experience researching, testing, and reviewing the latest tech. Before joining ASecureLife, John was an editor for Top Ten Reviews specializing in home security and smart home. In his spare time, he enjoys hiking, photography, cooking, and starting countless DIY projects he has yet to complete.