Lots of homeowners are investing in modern technologies like smart assistants (such as Amazon Alexa and Google Home), smart speakers, and internet-connected security cameras. And while all this technology makes life easier at home, it also raises concerns as more people worry about things like getting hacked, being spied on, and having their identity stolen.

We surveyed hundreds of Americans across the country to get a sense for how much people trust the new-age technology filling their homes, and what kind of concerns these modern gadgets raise as far as privacy and personal security. Keep reading to see some of our most interesting findings. 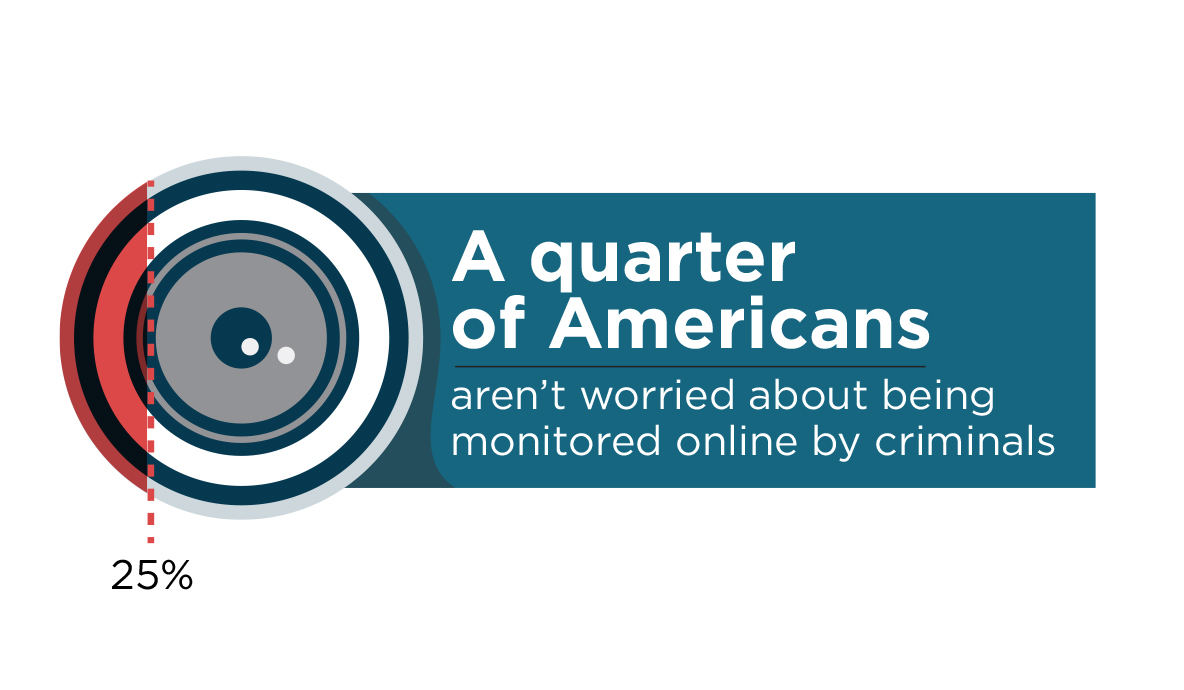 You’ve probably heard horror stories of criminals hacking into your computer or security cameras, so it makes sense that people are concerned about that.

But we were more surprised that around a quarter of Americans weren’t worried about being monitored online by criminals. Even when 23% of American households had someone victimized by cybercriminals in 2018.1

What’s more is that in 2017, the FBI’s Internet Crime Complaint Center (IC3) received more than 300,000 complaints that amounted to more than $1.4 billion in monetary losses for victims.2 So cyber crime is definitely a valid concern that all internet users and smart home consumers should look out for.

If your privacy or security has been compromised over the internet, you can report the incident to the FBI.

Around 65% of Americans we surveyed expressed concern that the government might be monitoring them. But only roughly half of Americans fear they’re being monitored by businesses, despite the constant evidence of targeted ads and shady data collection by some of the big social media companies. 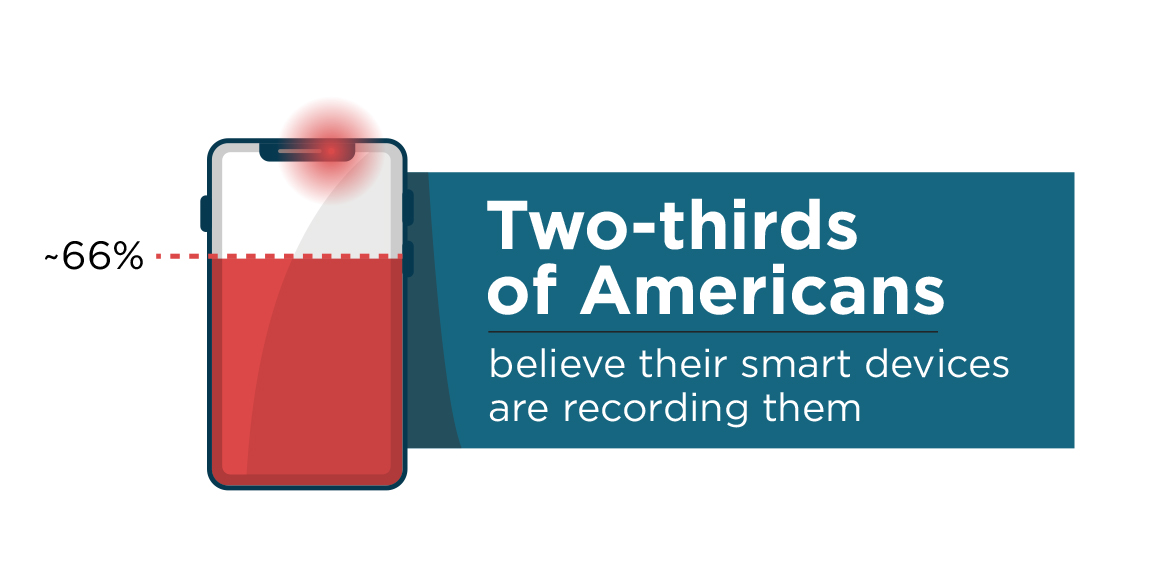 Two-thirds of Americans believe their smart devices are recording them

Ask Amazon’s Alexa if she’s listening to you and collecting your data, and she’ll reassure you she’s only listening for her name. In fact, Amazon recently admitted that it employs thousands of workers to listen in on what customers are saying to Alexa.3 The news confirms what many already feared about using smart assistants like Alexa.

While it might feel like a chore to read through a company’s terms and conditions, it’s important to know what kind of privileges a company is taking in terms of collecting your information. You can also try to adjust the settings on your smart equipment to maximize your privacy, like turning off your Amazon Echo’s Drop In setting that lets it automatically sync with other Echo devices to start a conversation.4 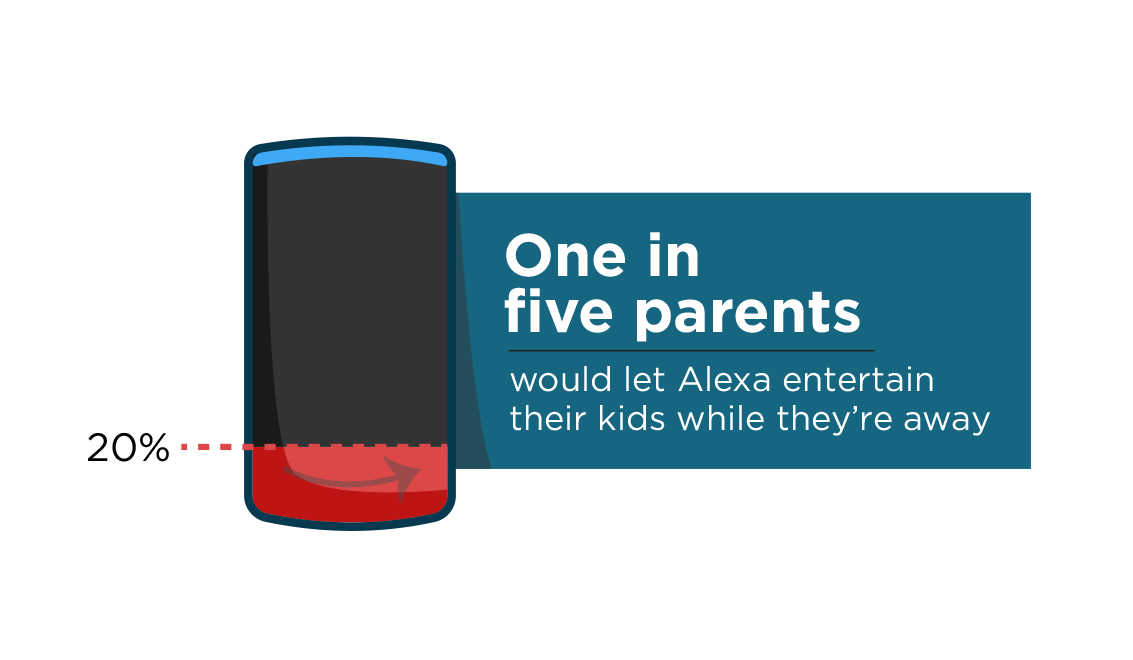 Would you trust Alexa as your babysitter? We found it interesting that a little over 20% of parents would be willing to trust their children with Alexa when they leave the house. With all the distrust around modern technology, we thought this was a notable contradiction.

Even though Amazon sells a kid-friendly version of the Echo Dot that can safely entertain your kids, we wouldn’t recommend using it to replace a babysitter who can be there to help if any emergencies arise while you’re not home.

Most believe our smart home gadgets can be easily hacked. Despite that fact, we’re still buying these products more than ever.5 But as sales increase for smart home products, so do concerns about privacy.

Nearly half of millennials already have smart products in their homes, which contradicts most people’s belief that smart home can be easily hacked.6 Can someone hack through my smart door locks? The jury is out on whether smart home products like smart locks can be hacked, but just in case, it’s worth doing your research before investing in these products to see how vulnerable they are.

Women are typically more concerned with home security than financial security, and the opposite is true for men

Our survey suggested that women place more concern on home security while men worry more about financial security. When asked if they fear a home invasion more than identity theft, 53% of women said yes, compared to 44% of men. When asked “Which would you rather do for a month: stop locking your doors or change all your passwords to ‘1234’?” men’s responses were split 50/50 while 59% of women preferred to change their passwords to “1234.”

Visit our resource for safety tips for single moms.

Americans age 55 and older are more protective of their financial security than their home security, and vice versa for younger people

In contrast, 63% of Americans between the ages of 25 and 34 were more concerned about home invasion, and 71% of that group would rather change their passwords to “1234” for a month than leave their doors unlocked for a month.

We surveyed 300 Americans nationwide to see how much they trust the technology they use regularly in their homes, as well as the focus of their concerns when it comes to privacy and security. Through the answers to our questions, we found some interesting correlations that pointed to people’s biggest concerns related to smart home technology, home security, and online privacy.

Whether or not we trust modern smart home and home security technology, it seems the world is relying on that technology more and more. While we might not know exactly how safe our technology is from hacking, manipulation, or data collection, it’s important for consumers to stay informed on the big smart home businesses like Amazon, Google, Apple, and Nest. 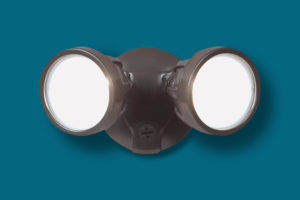 Best Security Lights for Outside Your Home
By
Kyle Lemmon