skip to main content
We may earn money when you click on our links. Learn More.
Get Home Security
Home » Financial Security » The Worst States for Identity Theft

The Worst States for Identity Theft

Identity theft is a big problem. How big? According to a study by Javelin Strategy & Research, consumers lost $16.8 billion to identity fraud in 2017. The ID theft business is positively booming, and it shows no signs of slowing down anytime soon. 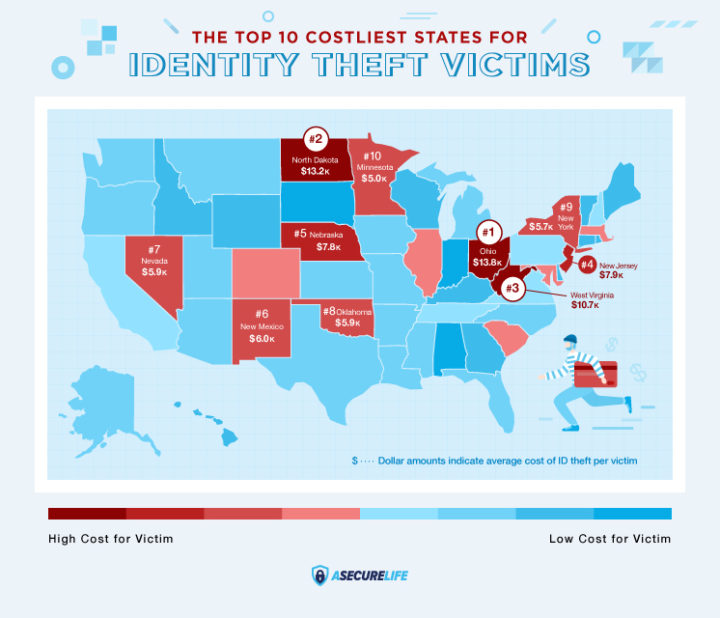 Our study helped us determine the worst states for identity theft, but it also provided some insight into ID fraud trends. Here are some of the highlights from our data analysis:

Check out the full list below to get the details on your state’s identity theft risks.

ASecureLife.com analyzed the losses from identity theft as reported to the Federal Bureau of Investigations Internet Crime Complaint Center in 2017. We looked at the average loss per victim, the average loss per capita using population data from the US Census Bureau, and the number of victims per 100,000 in all 50 states and the District of Columbia. From there, we assigned a rank 1–51 for each factor—1 being the “worst” outcome and 51 the “best” outcome—and averaged those ranks to determine the best and worst states for ID theft victims.

For this study, we used IC3’s definition of identity theft: “Identity theft involves a perpetrator stealing another person’s personal identifying information, such as name or Social Security number, without permission to commit fraud.”

Whatever your state’s rank, you should guard yourself against identity theft. Check your credit report regularly and store or destroy personal documents appropriately. Consider an identity theft protection service to help you monitor your identity. Check out our other articles for more ways to prevent identity theft—and stay safe out there!