skip to main content
We may earn money when you click on our links. Learn More.
Get Home Security
Home » Safety » What are the Safest and Most Dangerous States on the Fourth of July?

What are the Safest and Most Dangerous States on the Fourth of July?

Fourth of July weekend is one of the most dangerous times of the year in the United States. According to the Insurance Institute for Highway Safety, the Fourth of July is one of the deadliest days in the year for motorists, and more fires are reported on Independence Day than any other day in the year, according to the National Fire Protection Agency.

But where you are could determine how safe you are. Some states are particularly vulnerable to wildfires and highway accidents. Other states are much safer from these threats.

We want to help all Americans celebrate safely, so we’ve compiled data to rank all 50 states from safest to most dangerous. 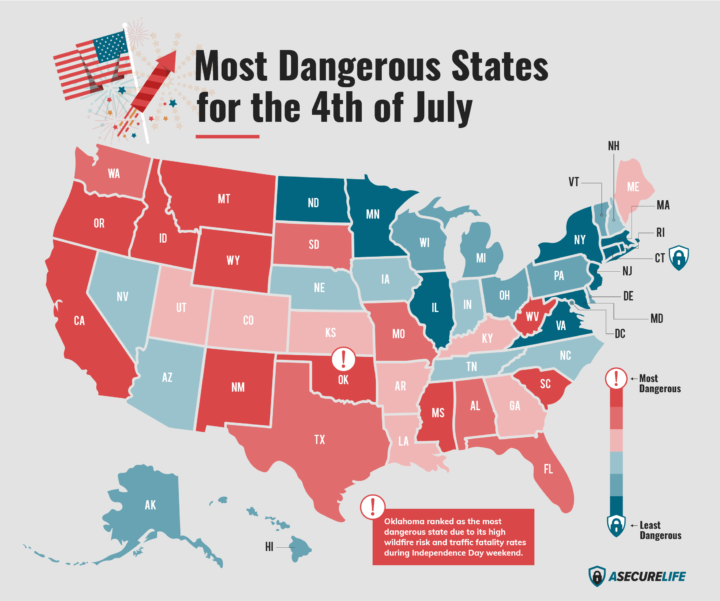 10 most dangerous states on July 4th

The most dangerous states

Oklahoma ranked as the most dangerous state during the Fourth of July. It has a high wildfire risk—about 1,700 acres per 100,000 burned in 2018— and a high rate of traffic deaths for Independence Day weekend; there were about 2.5 highway deaths per million residents.

Oregon’s was a close second, with a worse road score than Oklahoma. It had 3.3 highway deaths per million residents but a lower risk for wildfires. Some states made it into the top five most dangerous mostly due to just one factor—either highway deaths or wildfires.

California, the fourth-most dangerous state, ranked the highest of all states for wildfires, about 8,000 fires and more than a million acres burned. California has a low risk for fatal road crashes though.

The top five safest states are all on the East Coast. All had low risk of wildfires and above-average driving safety, which is surprising since the East Coast is so densely populated. Additionally, many of these states have an average or above-average number of adults with driver’s licenses. That said, New York, New Jersey, and Massachusetts are all in the top 10 states for the use of public transportation (see table source in link).

The state with the highest wildfire risk on the East Coast is New Jersey, but it doesn’t burn even a tenth as much as Oklahoma, Oregon, or California.

Maybe the urban areas make it a little harder to see the fireworks, but if you’re on the East Coast you can take comfort in the fact that you’re having a safer night than rest of the country.

However, no matter where you live, the Fourth of July is still one of the most dangerous nights of the year.

How to stay safe on the Fourth of July

Even if you drive safely, you can't guarantee others will. If you plan on driving at all during the Fourth of July weekend, use the following tips to be safe: 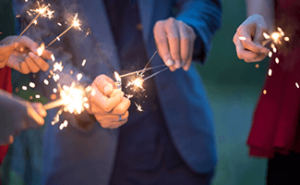 The best thing to do with a wildfire is to avoid it and call the fire department, but if you do find yourself trapped near a wildfire remember these safety tips:

If you’re on foot, find an area clear of vegetation like a ditch and follow the same steps above.

If you’re in your home, stay inside, close your doors but don’t lock them, fill all the sinks and tubs with cold water, and stay away from the walls.

While fun, fireworks can also be dangerous. Not only can they cause serious injuries, but in the right circumstances they can also start fires.

We recommend leaving the firework displays up to the professionals, but if you do use consumer fireworks on the Fourth, you can do a few things to minimize the risk for injuries and unwanted fires:

>>Learn more: Check out our tips on firework safety.

Whether you find yourself in one of the safest or most dangerous states on our list, it’s important to understand the inherent risks that come with the fun of the Fourth of July. With a little extra planning, you can still enjoy the holiday without putting yourself or your loved ones in unnecessary danger.

If you want to know where your state ranked, take a look at our full list below.

We ranked the states based on the fire and road accident risk.

Road risk data was taken from the National Highway Traffic Safety Administration. We didn’t want our data to be skewed by a population bias, so we measured road risk as the number of fatal car accidents per 1 million residents.

We used wildfire data from the Insurance Information Institute. From that raw data, the risk for fires was ranked by how many acres per 100,000 of land in the state were burned.

The road risk and wildfire risk scores were combined and organized into a list where lower scores correlated to a higher ranking on the danger list.