Frontpoint tops our list for home security thanks to easy installation, extensive smart home tech, and solid customer service. While it costs more per month than other DIY brands, customers tend to stick with Frontpoint past initial contract terms. 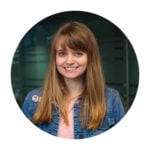 Overview
Frontpoint delivers a premium DIY installation experience and superior customer service. Customer-first policies, like a 30-day money-back guarantee and no fees if you move with your system, balance Frontpoint’s higher monthly monitoring fees. So while Frontpoint isn’t the cheapest system, its customers tend to stick with Frontpoint longer than other companies.

If you’re hunting for a security system with a manageable up-front cost and reliable professional monitoring, Frontpoint delivers—and not at the expense of quality equipment and service. We love the company’s emphasis on providing premium DIY equipment that makes the setup process effortless.

Frontpoint really sets itself apart with a commitment to providing quality customer service. We’ve always been impressed through our interactions with Frontpoint over the years, and it might be a key reason why Frontpoint customers tend to stick around long after their initial contracts are up—about five years longer.

Pros and cons of Frontpoint Security

Frontpoint’s monthly prices are competitive, but its base plan costs more than the cheapest plans of competitors like Vivint, ADT, and Link Interactive. But, thanks to Frontpoint’s DIY philosophy, there are no installation or activation fees with any of its plans. Plus, if you move with your Frontpoint alarm system, you won’t have to worry about moving fees.

>>Want to see how Frontpoint stacks up? Check out our breakdown of how much a security system costs.

Frontpoint’s monitoring plans are pretty standard across the industry. Let's dive into the specifics.

We like that all Frontpoint monitoring plans include home automation capabilities through Z-Wave. That means you can integrate devices like smart lightbulbs, smart garage door openers, and Amazon Alexa. This gives Frontpoint an edge over other companies like Vivint or SimpliSafe that have limited integration with third-party products.

Frontpoint is starting to offer its own smart home equipment, but if you already have some smart devices at home, they should work with your system as long as they use Z-Wave technology.

Cellular monitoring is the most reliable type of home security monitoring. There aren’t any wires a burglar can cut, and as long as there’s a cell signal, your home is connected to 24/7 monitoring.

But cellular monitoring is the only type of connection Frontpoint offers. That means if you live in a place with spotty cell coverage, Frontpoint may not be an option. If your home is in a rural location—on a lot of acreage near the mountains or on a rocky outcrop of the ocean—you might want to check out a security company that offers landline connections—like ADT or Protect America. 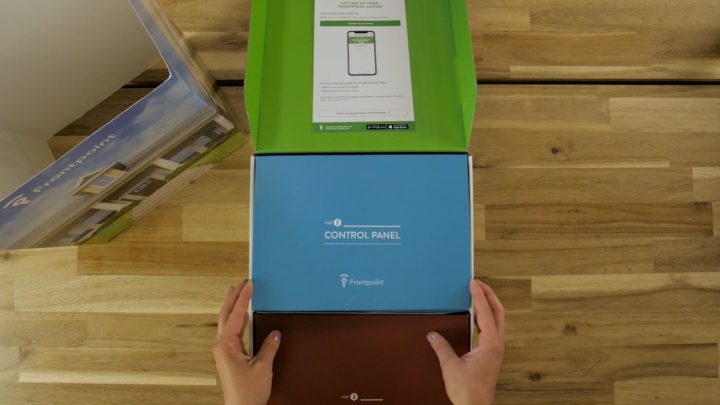 Frontpoint equipment is ready to go right out of the box. No tools, drilling holes, or batteries are necessary. All your equipment comes preprogrammed. That means all devices—from the control panel to the door and window sensors—are already set up, connected to each other, and ready to protect your home.

Setting up a home security system on your own can be daunting, but Frontpoint makes it so easy you can get it done in less than an hour. In fact, we’ve seen a Frontpoint security system unboxed, installed, and on the job in around 30 minutes.

Crash and Smash Protection alerts Frontpoint’s alarm monitoring center if an intruder tries to tamper with your control panel. That means no one can easily engage or disengage your home security system in an attempted break-in.

Frontpoint’s system goes into an alert status any time a door or window is opened. Because a burglar has to enter your home to get at your control panel, Frontpoint’s monitoring center is already on alert before the intruder can do any damage.

If you disarm your system after the entry alert, the monitoring center will stand down. But if you don’t disarm the system, the monitoring center will view it as an intrusion and call in the cavalry. It’s too late for the thief to do anything to stop the alert at that point. Smashing, stomping, or any other kind of tampering won’t make a difference—the thief is cornered.

Frontpoint monitors its systems over a 4G cellular network, which is far more reliable than internet or landline monitoring. Even if there’s a power outage in your home, a backup battery keeps your system running, greatly reducing the chance for interruptions in your home monitoring.

Frontpoint’s customized mobile app makes it easy to remotely control your alarm system. We like its user-friendly interface and the ability to view a live feed from your security cameras. You can even integrate some third-party smart home devices through the app. 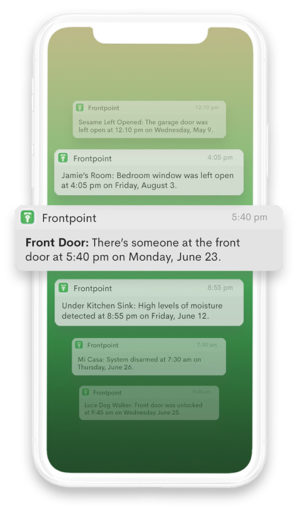 While Frontpoint uses mostly Alarm.com equipment, its touchscreen control panel is totally unique. The control panel software is clean and organized, making it easy to arm, disarm, and customize your home security system.

Two Frontpoint features that stand out are the snapshot feature and dual-path connectivity. With snapshot, every time the system is disarmed, the built-in camera in the panel takes a quick snap and stores the photo. Now you’ll be able to see if Junior disarms the system to step out after curfew.

Dual-path connectivity allows your system to communicate over broadband Wi-Fi as well as cellular connections. This gives you the fastest, most reliable connection at all times. If your home Wi-Fi is faster than the cellular signal, the panel will pick that connection—but you’re still protected by cellular backup if your Wi-Fi goes out.

We like to see Frontpoint taking a more active role in its equipment offerings. The company plans to customize more of its equipment in response to customer feedback and expert input, once again demonstrating its commitment to customer service.

You can reach Frontpoint’s customer support line from 8 a.m. to 11 p.m. (ET) on weekdays and from 10 a.m. to 7 p.m. (ET) on Saturday and Sunday. It also has a 24-hour emergency line if you run into any serious issues. Frontpoint’s customer support staff have a reputation for being friendly, helpful, and knowledgeable. We at ASecureLife are truly satisfied with the interactions we’ve had with Frontpoint over the years.

What customers are saying about Frontpoint

“We have had nothing but positive interactions with Frontpoint. The system was easy to set up… the equipment has not failed, and we’ve had the same system for nearly two years. Customer service is amazing. The hold times are short, and the technicians are always able to help. We’re happy with the protection and the cost.” —K. Hickey, customer review on ASecureLife

Customers appreciate how easy Frontpoint makes the setup process. From its attention to detail to the preprogrammed equipment, Frontpoint makes DIY setup simple. Customers confirm that the installation is as easy as promised, which creates a great first impression for new Frontpoint customers.

And if you weren’t born with the DIY gene, Frontpoint offers guided installation assistance. Another great resource to help along the way is Frontpoint’s online catalog of user guides.

Customers stay with Frontpoint Security for an average of eight years.

Frontpoint no longer uses contracts. However, if you choose to do a monthly equipment payment plan, you may have to pay the rest of the equipment cost when you cancel, depending on your agreement with the company.

Either way, you get 30 days to see if you want to stick with Frontpoint. The 30-day money-back guarantee starts the day your system is delivered. If you decide you don’t want to keep the system, all you need to do is let Frontpoint know and return the equipment within that 30-day period. Keep in mind that shipping and restocking fees will be taken out of your final return credit amount.

Do we recommend Frontpoint security?

Do we recommend Frontpoint security?

If you want the extra security that comes with high-quality 24/7 professional monitoring without the hassle of scheduling in-home safety inspections and professional installation, Frontpoint is it. It’s also one of our favorite high-end DIY security systems for renters or people who might move.

Frontpoint sets itself apart from other home security companies with its thoughtful customer service, easy DIY installation, and overall reliability. With Frontpoint, you get top-end equipment and a high-quality, reliable security system. But again, its monthly monitoring prices are on the higher end.

If you’re ready to protect your home with Frontpoint, take a look below to find a plan that works for you.

View Frontpoint Plans
*Offer requires signing the Frontpoint Terms and Conditions; taxes and fees may apply; valid for new customers only; cannot be combined with any other offer; offer void where prohibited and valid as long as supplies last; indoor camera valued at $99.99; must be added to cart at checkout; one free indoor camera per customer; requires Ultimate Monitoring Plan at $49.99/month; includes free standard shipping; offer valid through 2/2/20 at 11:59PM EST. Risk Free Trial requires a subscriber to activate or initiate a hardware return within 30 days from receipt (“Trial Period”). Complete details available at Frontpoint.com.

Written by
Brianne Sandorf
Brianne’s spent the last five years writing professional, research-based content. Before joining ASecureLife, she worked on an award-winning gun safety course and served on a workplace safety committee. She has pieces and quotes published across the web, including on Stanford's student blog and Parents.com. Her hobbies include wearing a seatbelt, wearing a life jacket, and keeping her arms and legs inside the ride at all times.

Sign up for tech deals, security reviews, and updates in your inbox.