skip to main content
We may earn money when you click on our links. Learn More.
Get Home Security
Home » Smart Home » 7 Futuristic Gadgets from Movies You Can Buy Now—and 3 We’re Still Waiting For

Have you ever seen a sci-fi or fantasy movie and wished the cool tech in it was real?

That’s probably how people felt in 1989 when Marty McFly sped across the screen on a hoverboard in Back to the Future II.

Approximately 24 years later, a Chinese company introduced the Smart S1 in August 2013. This strange, handle-less scooter was wildly popular, and competitors quickly started to make their own versions. Out of our desperation to live in Marty McFly’s fantasy version of 2015, and for lack of a better term, we’ve collectively agreed to call these scooters hoverboards.

Keep reading to learn more about movie tech that eventually became a reality—and find out which hypothetical gadgets we’re still waiting for.

Tony Stark, from the 2008 movie Iron Man (and a seemingly endless string of follow-ups), has a lot of cool gadgets, but the one we envy most might be J.A.R.V.I.S—the butler extraordinaire and powerful voice-activated personal assistant who basically runs Tony’s entire home.

Fortunately, living like a “genius, billionaire, playboy, philanthropist” is more attainable than ever.

Amazon and Google have both released voice-controlled assistants that can manage tons of devices throughout your home. (Apple’s HomePod is on the way soon and should offer similar features.)

When you pair these assistants with home automation equipment, you can play music, control lights, search the internet, change the temperature in your home, connect to security cameras, and more—all by speaking simple voice commands to Amazon Echo and Google Home.

2001: A Space Odyssey may have given you nightmares about what technology could do—but this 1968 movie also seems to have inspired some of today’s coolest gadgets. For example, during a meal, crew members watch the news on devices that look eerily similar to iPads that were introduced about 42 years later.

So far, they seem to be useful and nonthreatening. But we should note—that’s what people initially thought of HAL.

In 1993’s Demolition Man, Wesley Snipes plays an evil crime lord who intimidates his nemeses by turning his office lights on and off with his voice.

Now you too can turn lights on and off without leaving your seat—and that’s just the beginning. Philips Hue lightbulbs can sync with music, change colors, and wake you up gradually. 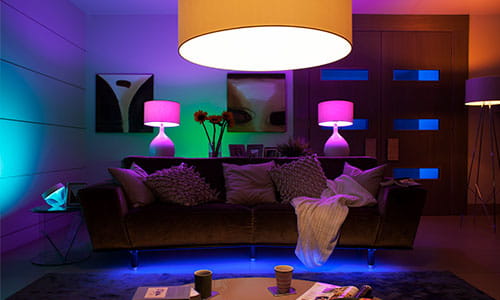 You can easily control them with an app or connect them to smart home devices like Amazon Echo and Google Home for voice-activated intimidation of your enemies.

The Matrix blew us away with groundbreaking special effects in 1999. It also made virtual reality seem both super cool and super terrifying.

In the late ‘90s, VR tech seemed pretty out there, but now you can put it on your Amazon wish list.

The Oculus Rift is one of many VR headsets out there. (The HTC Vive and Sony PlayStation VR are also pretty cool.) With the Oculus Rift gear, you can see African wildlife up close, visit Mount Everest without the making the grueling climb, or play immersive online games. Maybe just avoid any mysterious men in dark suits and sunglasses.

In 1997, Bruce Willis still had hair; Gary Oldman was playing campy villains with exaggerated, twangy country accents instead of renowned British statesmen; and video doorbells were a just a figment of Luc Besson’s incredibly colorful imagination.

In The Fifth Element, our buddy Bruce plays Korben Dallas—a grumpy taxi driver who has to help a hot girl save the world. His cluttered, cramped, futuristic apartment doesn’t exactly inspire envy, but we do like his video doorbell.

Luckily, video doorbells are now a real thing, and they can help you avoid unwanted guests, deter would-be package thieves, and let friends into your house to feed your cat.

Back to the Future Part II made 2015 look promising. When that year actually rolled around, some things were better than imagined, but we were still waiting for flying cars, hologram movies, and adjustable self-drying jackets.

At least we eventually got hoverboards—or at least something we’ve all agreed to call a hoverboard.

Self-driving cars have popped up in quite a few movies, but our favorite might be the Batmobile from the 1960s TV show and Tim Burton’s Batman. Because let’s be honest—who doesn’t want to be Batman?

While we’re happy to see that so many cool things from movies have become a reality, there are still some pieces of tech we’re anxiously waiting for.

We’ve been waiting for jetpacks for a very long time. One of the first times we saw a jetpack in a movie was in James Bond’s 1965 adventure, Thunderball.

Decades later, we’re getting shiny new Star Wars movies, but there are still no jetpacks available for regular consumers.

Harry Potter lives in a world where magic is real, which means he has access to all sorts of cool things we muggles can’t have.

If we could pick just one magical item, we’d probably pick the invisibility cloak. The ability to hide from awkward conversations alone would be worth it.

Kingsman: The Golden Circle came out in September 2017—and like its predecessor (and the James Bond films that clearly inspired it), this silly spy movie included lots of outlandish gadgets.

Heroes and villains wield everything from laser lassos and weaponized aftershave to bulletproof umbrellas and retractable mechanical arms. However, the most ridiculous gadget in the movie might be the Alpha Gel, a head wrap that heals bullet wounds to the brain.

While we can’t think of many practical uses for laser lassos...

... a device that heals bullet wounds would be awfully useful.

What are you waiting for?

Is there cool tech from movies that you wish was real? Maybe if you wait long enough, your wishes will come true. It eventually happened for self-driving cars—and we still believe that jetpacks can happen.