skip to main content
We may earn money when you click on our links. Learn More.
Get Home Security
Home » Home Security » When Did Security Cameras Come Out?

When Did Security Cameras Come Out?

Security cameras have evolved a lot since they first debuted in Stalin's Russia more than 90 years ago. Let’s explore the surprisingly fascinating history of security cameras.

The core technology, ideas, and ethics behind security cameras connect closely with the origin of closed-circuit television (CCTV). Security cameras, as we now know them, didn’t exist during this time.

The first documented use of surveillance cameras was in Soviet Russia during the Stalin era. In 1927, a Russian scientist named Léon Theremin invented a simple wireless system that connected a video camera and television together. It was eventually used to watch visitors coming to the Kremlin in Moscow. That’s a hell of a birthday for security cameras. 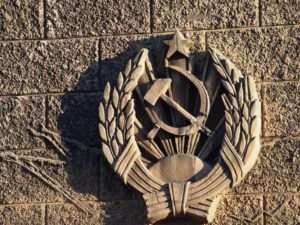 In 1942, around 15 years after the Soviets created a rudimentary CCTV system, the Nazis created one of their own. Siemens AG built the system in 1942 for the airfield at Peenemunde, Germany, to monitor the launch of V-2 rockets. The system, designed and installed by the German engineer Walter Bruch, allowed people to remain a safe distance away from the launch site.

Science fiction has always influenced technology, and security cameras appear in some of sci-fi's most (in)famous novels. In Nineteen Eighty-Four, George Orwell describes a totalitarian surveillance state where the Thought Police monitor the middle-class through devices called telescreens.

Telescreens are a hybrid between security cameras and TVs, not unlike modern smart TVs.

“Big Brother is watching you”

Orwell introduced the world to the term Big Brother, which people still use today to describe government surveillance (benevolent or not) that uses technology like security cameras.

As you probably remember from your high-school English class, 1984 makes a sharp critique of surveillance that still resonates today. This story will stay in the public conversation around privacy as long as there are security cameras.

While our previous examples established the basic technical (and ethical) principles of security cameras, this technology was primarily used by governments and militaries. After 1950, CCTV technology started to spread beyond military applications into commercial use like manufacturing, education, and medicine.

Due to limitations with the technology at this time, it was expensive to use CCTV for security purposes because companies had to pay someone to monitor the live video feed. Using video for the sole purpose of improving security wasn’t practical for all but the largest of organizations.

Using cameras to look for suspicious activity was uncommon until the late 1960s. One notable example is the city of Olean, New York. The city installed video surveillance on its main business street in September 1968 specifically to fight crime, making it one of the earliest adopters of this now-common technology.

Today, we take for granted that all security cameras can record video, but before the 1970s, there wasn’t a good way to do this. Recording security footage involved magnetic tape reels that weren’t easy to work with.

The advent of video cassette recorders (VCRs) in 1972 made it suddenly easier to record video—users could record over old video footage or quickly switch tapes. As a result, many types of businesses adopted security cameras during the 1970s, especially banks and stores. 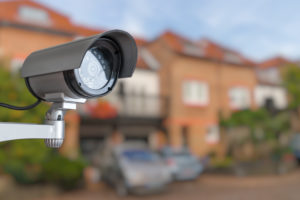 Public use of CCTV in the United Kingdom

During the 1970s and 1980s, the United Kingdom performed experiments to see if CCTV cameras could deter criminal activity and keep citizens safe. The crime prevention experiments were so successful at the time that law enforcement agencies dramatically increased the number of security cameras in public locations. Even today, London is one of the most surveilled cities in the world.

Although the technology behind modern digital cameras was a product of the 1970s, it wasn’t until the late 1990s that it started appearing in mainstream camera products like security cameras for the average business or home.

Digital cameras have a few distinct advantages over traditional analog cameras. Digital security cameras save video to a hard drive or flash storage and delete old footage automatically. This means they can record continuously, though looking over that much security footage is still a challenge. 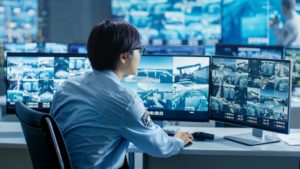 Another 1990s innovation was the digital multiplexer, which allowed a digital video recorder (DVR) to simultaneously record video from more than one security camera. Until this time, every security camera required its own dedicated recording device. Multiplex camera setups are the dominant form of security camera in most businesses today. It’s strange to think that the technology is younger than most millenials!

In contrast to the crisp HD video we have today, early digital security cameras had poor resolution and framerates.

In 1996, Axis Communications released the Axis Neteye 200, the first internet protocol camera (IP camera). IP cameras enable remote access via the internet so you can watch the video anywhere in the world. Most consumer-grade security cameras today are IP cameras.

What’s next for security cameras?

Security cameras will get more advanced in the future, most likely through software improvements and integrations into smart homes. We’re starting to see this in many cameras today, like the Google Nest Cam IQ Indoor, which was one of the first retail security cameras with facial recognition and AI. With the advent of drones and surveillance-based social networks like Neighbors by Ring, video surveillance continues to become more common and extensive than even Orwell imagined.

Written by
John Carlsen
John is a technology journalist with over six years of experience researching, testing, and reviewing the latest tech. Before joining ASecureLife, John was an editor for Top Ten Reviews specializing in home security and smart home. In his spare time, he enjoys hiking, photography, cooking, and starting countless DIY projects he has yet to complete.