skip to main content
We may earn money when you click on our links. Learn More.
Get Home Security
Home » Home Security » Do Fake Security Cameras Work?

While we don’t recommend relying on fake security cameras (more on that below), they can be a better deterrent than nothing. 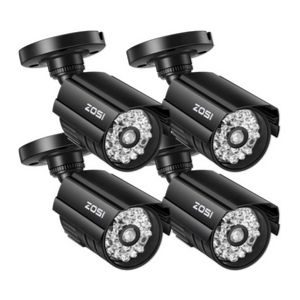 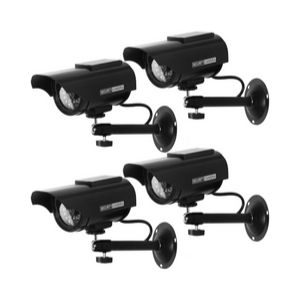 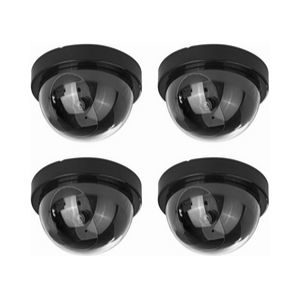 Most fake surveillance cameras have a plastic casing—a dead giveaway to potential burglars that it may be a less-than-real security measure. But the very affordable ZOSI Bullet Simulated Camera has a sturdy and realistic aluminum housing, and you can add some wiring, if you so desire, for a more realistic touch.

ZOSI makes real cameras in addition to fake ones. So if a potential intruder quickly googles the name on the camera to see if it’s a fake, there’s a chance they’ll be duped.

ZOSI’s dummy bullet camera comes with one blinking red infrared LED. At night, the light stays illuminated to make it look like the device is real and has night vision capabilities. But it might do more harm than good, since most real cameras don’t have that feature. If you mount the ZOSI near your home, take the batteries out to do away with the blinking LED altogether.

Customers say the ZOSI looks like the real thing—some even report that it’s good enough to deter teen terrors in their neighborhood. They also note that installation is quick and easy.

ASecureLife’s recommendation: If you have to have an imitation security camera, the ZOSI dummy bullet is a good pick. It won’t give you any of the features of an actual wireless security camera, but it looks real enough to dupe amateur troublemakers.

>>Get the ZOSI Bullet Simulated Camera

At $29.99 for a four-pack, the WALI Dummy Bullet Camera is inexpensive, compact, and fairly easy to install—just mount, screw in, and go. It hard to tell it’s a fake: it lacks the telltale motorized pan movement of other fake cameras, includes a short wire, and comes with a warning sticker decal. Plus, it’s powered by the sun so you won’t go through as many batteries.

Still, the WALI Dummy Camera has a blinking LED light when powered, which may give it away. And instead of listing a brand name on the side, the camera simply reads “Security Camera,” which isn’t exactly subtle (you should be able to remove it with nail polish remover, though).

Customers say the WALI Dummy Camera looks sturdy and convincing, especially without the red light. Some report using them alongside their real cameras as a security boost.

ASecureLife’s recommendation: The WALI Dummy Camera isn’t the best decoy security camera, but it has solid reviews from satisfied customers who say it’s a good value.

Compared to similar fake security cameras, the Armo CCTV Dummy Dome Camera is super affordable. That’s because the Dummy Dome is made of plastic, which is cheaper than aluminum.

But there’s no brand name on the Armo Dummy Dome, which could be suspicious to the trained eye. Most legit CCTV cameras, like the Avalonix 4K IP Dome Camera, have a brand name printed on them.

The Armo Dummy Dome has positive reviews, with customers saying it’s easy to install and looks legitimate. But a few customers note that the Dummy Dome looks obviously fake up close and that some mounting materials are missing when the faux camera arrives.

We researched high-ranking dummy security cameras, prioritizing cameras that looked realistic, had positive customer reviews, and when possible, had a maximum of one red LED light.

Dummy security cameras may work as a deterrent from a distance, but we don’t recommend them as a replacement for true security cameras. The best way to secure your home and keep your family safe is with a security system or stand-alone surveillance camera.

If you’re worried about the cost of security systems or legitimate security cameras, imitation cameras can be a tempting solution: they’re cheaper than real security cameras, and they’re typically easier to install. But anyone with camera experience—intruder or not—can spot whether yours is a fake.

Dummy cameras are easily identifiable: most come with a blinking red LED light, a feature that true security cameras lack. They’re also typically cheaper looking, with a plastic casing. And if your imitation security camera doesn’t deter trespassers, you won’t have any proof of tomfoolery, whether the culprits are amateur burglars or loitering teens.

Bright, motion-activated security lights make it harder for criminals to stay undetected when creeping on your property.

For a bit more money, you could purchase an inexpensive security camera. That way, when thieves approach your house, you can record and review their actions, and if necessary, hand the video over to the police.

At $30, the Wyze Cam is an affordable cheap camera option. It’s also the same price as a four-pack of faux cameras—and way more effective, with two-way audio and night vision up to 30 feet. Plus, it works with both Amazon Alexa and Google Assistant.

A home security system can be an investment. Fortunately, service providers like SimpliSafe and Cove offer inexpensive plans that help you secure your home with your choice of motion detectors, window sensors, cameras, and more.

As mentioned above, dummy security cameras are no replacement for real security cameras. They can be fairly obvious or cheap looking to a relatively well-trained eye. And they’re especially dangerous in the workplace: decoy cameras can lull employees into a false sense of security. That means if an employee’s valuables are stolen, a victim may choose to sue the company.

How to spot a fake security camera

It doesn’t take much to spot a fake security camera. Here are a few things to look out for.

Faux security cameras often have a bright red light that blinks throughout the day. It’s meant to give the impression that the camera is working at all times. The thing is, real security cameras don’t have that feature. Cameras with night vision may emit a faint red light during darker hours, but that’s about it.

Imitation security cameras are usually covered in a not-so-durable plastic casing. True CCTV and wireless cameras—particularly those located outdoors—will have a more durable, weatherproof casing made of aluminum.

Most legit cameras will have their brand name printed somewhere—Ring does it, as does Arlo. In contrast, many dummy cameras have “Security Camera” printed on the side or nothing at all, which could be a giveaway.

File this one under “How to spot a real camera.” Decoy cameras usually come in one of two styles: a bullet camera or a dome camera. So if you see a camera without the bullet or dome body, it’s more than likely a real one.

Fake security cameras can be better than nothing, but not by much. They’re easily identifiable and typically only work as a deterrent from far away.

If you’re looking for an inexpensive way to make your home more secure, we recommend an inexpensive camera, like the Wyze Cam. You’ll get all the benefits of having a real camera without having to break the bank.